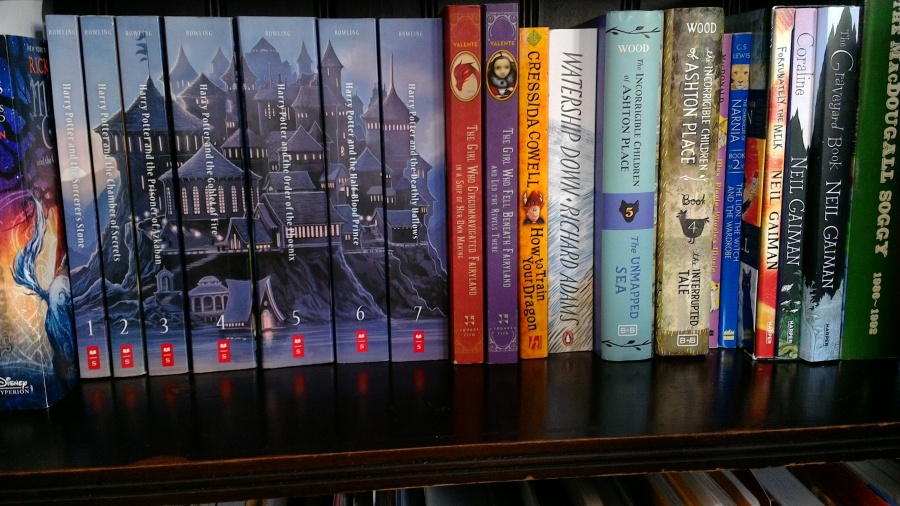 It’s not every evening, but as often as we can – maybe once a week and maybe several nights in a row – the four of us sit down together on our old beige couch to read a bedtime story. This usually happens around 7:30, when the kids are ready for bed.  The choosing of the stories is a pretty big deal, and once the novel is chosen, we all commit to it (to the extent that I have yet to complain much about the Rick Riordan one that we are currently making our way through). We read one or more chapter a night.

Our first family novel was probably The Mysterious Benedict Societ by Trenton Lee Stewart. At the time, I thought that The Prophet was too young to understand the novel — he used to need a small toy to fidget with during story time — but he would periodically pipe up to remind us of the key facts from previous chapters that we may have forgotten. I can’t count Charlotte’s Web as our first family story because it was only 3 of us reading, even if it did cause La Neige to become vegetarian for the rest of her life, and even if it was one of very few books that caused The Historian to cry when reading the last chapter.

Speaking of crying, my favorite book of storytime, perhaps of all time, is The Graveyard Book, by Neil Gaiman. It’s based on Rudyard Kipling’s The Jungle Book.  To those who have read the source material — that would be The Historian and La Neige — Gaiman’s version is a huge improvement. It’s about a boy whose family is murdered by The Man Jack, so he toddles into a nearby graveyard and is adopted by a family of ghosts. Over the years, he learns to turn himself invisible, yearns and fails to make friends with normal living kids his age, wards off demons, participates in a highly memorable danse macabre, and eventually walks away from the graveyard. The last few pages were so moving that we had to pass the book over to La Neige or we couldn’t have finished it.  Gaiman’s writing is extremely vivid without being showy, and he has a devastating eye for detail. I was not prepared for how much this book affected me.

At some point, it became clear that family story time was “our thing,” and I started collecting the books that we read on one shelf in our living room. I’m not quite sure of the order, since the presence of series’ will tend to mix everything up, but I think that we’ve read:

In the olden days, I think families gathered around to read together. It takes something that my nerdy family loves, which is READING, and makes it a social activity. We have giggled together at the antics of Lady Constance of Ashton Place; and we have debated around the dinner table the fitness of Stewart’s mind games or Harry’s character as the Chosen One. La Neige has decreed that since we started reading Harry Potter when both she and Harry were in First Year, we read one book a year. This means that we still have the last one to go. We may break with tradition and read two Harry Potter books in one year. This would demonstrate how extremely flexible and fair-minded we are.

For a while, The Historian and I would trade the reader role back and forth, but then I got too sick and tired and he did all the reading. Good thing he’s a great reader and has an excellent Hagrid-Scottish accent. I have been known to fall asleep during story time and had to go back and reread the end of Harry Potter and the Half-Blood Prince, but miraculously, the four of us still fit on our compact beige couch.